“… I think I speak for many others when I suggest that he should be invited again – we would all enrich our lives, if we get to know as many sides of this outstandingly talented musician and composer as possible.”

…His piece, Tre Hymni was a beautiful mixture of tradition and invention; it can be characterised by clean modesty and parts composed with best taste. Just when we were amazed by the mature way of handling the piano, we were distracted by a beautiful vocal or cello melody, while a perfectly portioned flute melody formed a counter-piece…

“… the sensitively composed piano movements are the diverse utterances of an independent composer without tinges of any reminiscence.”

“… and indeed, the world of music is familiar with him as an immaculately prepared composer who feels at home in a number of genres and has an excitingly unique style.”

“… the artist played all these extremely complex compositions by heart without a single mistake or musical error, with highly colourful registration, and with a high level of focus embracing all details, while the style of the performance was elegantly cool and unbelievably self-confident.”

Criticism of the TETRA CD 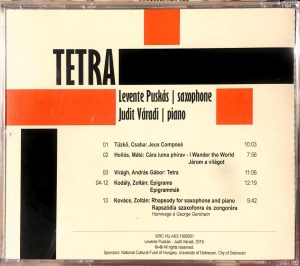 This CD record by Levente Puskás and Judit Váradi fills a gap: the saxophone is rarely used as a solo instrument at classical music events. The musical literature available for this musical instrument is largely incomparable with that of other woodwind instruments. Another reason for depicting this recording as a gap filler is that the 20th and 21st century Hungarian classical music has still not been appreciated enough. The first saxophone was created in 1842 (invented by Adolf Sax) and could already be heard in Berlioz’s Chant Sacré in 1844, where Sax was playing on the instrument himself. At first the saxophone family made itself known as musical instruments used by military bands. Later it transformed into an important asset of jazz bands, but still has not managed to evolve in the world of classical music.

The first piece of the CD record is Jeux Composé written by Csaba Tűzkő for the request of Levente Puskás. This piece merges the classical format with jazz-like harmonies, and traces of the Hungarian folk music can also be discovered to create an exciting and unique musical atmosphere for the listener. Zoltán Kovács’s work called Rhapsody for Saxophone and Piano also allows us to find certain jazz music elements in the piece. Máté Hollós’s Cáralumaphirav (Wandering Around the World) was originally written for clarinet, piano and CD, but can also be played on bass flute, bassoon or saxophone. It is an impressive, fantasy-like piece with the duality of creating an atmosphere and being in both the past and the present. What gives a special spice to the composition is the way the two musical instrument melts into the sound of the authentic folk music recording played in the background.

The title piece of the CD record is András Gábor Virágh’s work called Tetra. The composition’s title is a reference to its special format: four major thematic parts are brought together to create the entire piece. Unique composer ideas such as distinct characters, motifs and rhythmical solutions can be identified. In playing the piece, Levente Puskás’s artistic interpretation provides wonderful tones, sensitive character-forming and colorful dynamic patterns. Judit Váradi is an excellent partner and has the ability to reflect to each musical interpretation brought up by Puskás. What we can hear is music played by two artists forged in harmony (I also heard them live at their performance in Budapest). They have the ability to provide that extra pleasure to their audience. This recording made at the Faculty of Music of the University of Debrecen can be recommended for everyone.