“… I think I speak for many others when I suggest that he should be invited again – we would all enrich our lives, if we get to know as many sides of this outstandingly talented musician and composer as possible.”

…His piece, Tre Hymni was a beautiful mixture of tradition and invention; it can be characterised by clean modesty and parts composed with best taste. Just when we were amazed by the mature way of handling the piano, we were distracted by a beautiful vocal or cello melody, while a perfectly portioned flute melody formed a counter-piece…

“… the sensitively composed piano movements are the diverse utterances of an independent composer without tinges of any reminiscence.”

“… and indeed, the world of music is familiar with him as an immaculately prepared composer who feels at home in a number of genres and has an excitingly unique style.”

“… the artist played all these extremely complex compositions by heart without a single mistake or musical error, with highly colourful registration, and with a high level of focus embracing all details, while the style of the performance was elegantly cool and unbelievably self-confident.”

András Gábor Virágh had the prestigious honour to receive – the second time after 2015 – the Benedek Istvánffy COMPOSER AWARD in recognition of his Sinfonietta work written for orchestra,

which was premiered by Zugló Philharmonics in 2016 at the MüPa Palace of Arts.

The award named after the 18th-century composer Benedek Isvánffy has been granted by the Hungarian Composers’ Union since 1999 to recognize the work of composers under age 40. 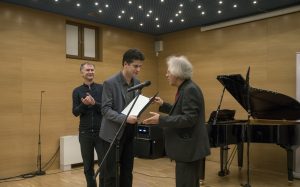